Cloud adoption has nearly become complete with most businesses having much of their workflow in the cloud. Public cloud end-user spending is expected to grow another 23% in 2021, as companies move any last offline processes to the cloud.

Platforms like Microsoft 365, QuickBooks Online, and Zoom have become mainstays of the hybrid company, where employees are often working from either home or office, depending on the day.

Microsoft has been a leader in cloud computing, and it’s now at the forefront again introducing a user-friendly cloud PC environment called Windows 365.

Windows 365 was released in early August and is designed to move one of the last offline processes into the cloud, which is the computer desktop. Instead of storing your OS, files, folders, settings, etc. on a computer hard drive and having to access that one device each time you need to work, Microsoft is putting that environment onto a cloud server with anywhere, any device access.

Is the modern office ready for a fully cloud workflow? It seems they are, judging from the fact that Windows 365 trials are temporarily suspended due to reaching capacity. 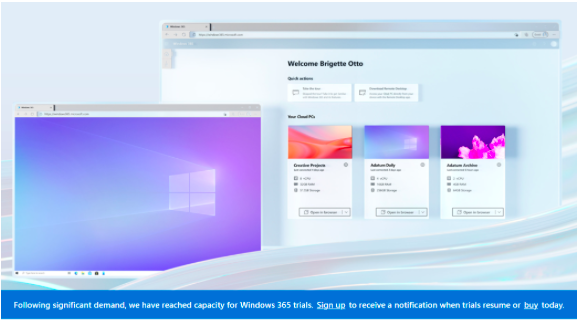 Moving to virtual computers is a big step, so you don’t want to do it just because it’s popular. It’s important to weigh the benefits, disadvantages, and costs before deciding to switch your Dallas business workstations to the cloud.

We’ll go through the costs of Windows 365 below, as well as the pros and cons of using cloud desktops.

Pros of Switching to Cloud PCs

In a survey of over 9,000 workers, 83% of them said that a hybrid work model would be optimal. A majority of business leaders agree, with 62% saying they can maintain a strong company culture with employees in the office between 2 to 4 days per week and working from home the rest of the time.

Working between home and office brings an obvious logistical challenge when it comes to an employee computer.

Do they work from two different computers (one at home and one at work)? That doesn’t provide a consistent experience. Do they have to carry a laptop between home and work? That can also be problematic.

A cloud PC is the perfect solution in this case because it can be accessed by any device. An employee could log into the same PC desktop environment with all their files and settings no matter where they were without having to carry around a physical computer.

Device and network security become a larger concern when you have employees working from home. Companies have to worry about ransomware, firmware attacks, and whether or not the computers WFH employees are using have proper IT security protection.

When you use Windows 365 for your team’s work PCs, you aren’t left in the dark about whether they’ve applied the latest OS security patch or are keeping their anti-malware turned on. You can administer all security remotely from a centralized place.

Pay Only for What You Need

A common occurrence in offices during tough economic times is they end up having to downsize staff, but they can’t downsize their hardware. So, the computers they’ve purchased just sit unused, becoming outdated.

When you use a cloud service for your employee PCs, if you downsize, you can simply downsize your subscription, so you’re only paying for the number of virtual computers that you need. Likewise, if you are adding on employees, you can add new PCs for a much lower upfront cost than making an outright computer purchase.

Cons of Switching to Cloud PCs

In order for a cloud PC to work as effectively as a traditional computer, the user needs to have a good internet connection so there is no lag in the environment. Since most work processes are already in the cloud, this may not be an issue, but it is something to consider if you have any employees that work in areas with spotty reception.

In the case of a storm that knocks out the internet signal, it also means that employees will be at a standstill. If employees are using a physical computer, there’s a chance they could still work in a limited capacity offline.

You Don’t Own the Computer

As with the move from one-time purchase software to Software as a Service (SaaS), your company would need to transition to an environment where computers were no longer owned, but rather “rented” as a service for a subscription fee.

We’ll go through the pricing next so you can make a comparison between costs versus benefits.

How Much Does Windows 365 Cost?

Windows 365 is being advertised for business and enterprise users, and pricing is as follows:

A typical replacement cycle for a business PC (how long it’s used before you buy a new one) is roughly 4 years. At the mid-level price of $41/user/month, a company would pay $1,968 over four years.

Depending upon the type of devices you purchase, this may be comparable, or slightly more. But when factoring in the security benefit and anywhere access, you might just find Windows 365 makes perfect sense as your next digital transformation.

Learn More About Switching Your Office to Cloud PCs

Cloudadvize can help your Dallas-Fort Worth business review the advantages vs costs of switching to Windows 365. If you decide a cloud PC environment is for you, we can help make it happen with minimal work disruption.